Inhabitat a écrit:A new report envisions a nightmare scenario in which just three climate change-driven disasters could lead to global food shock, resulting in food riots as the price of basic crops skyrockets and stock markets experience significant losses. The risk assessment, which was produced by insurer Lloyd’s of London—with support from the UK Foreign and Commonwealth Office and vetted by academics from a number of institutions—shows just how close humanity may be to catastrophic collapse by mid-century unless significant changes are made to slow global warming. 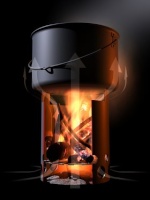