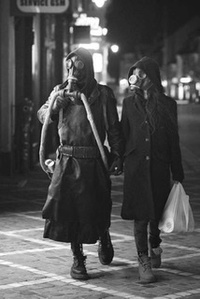 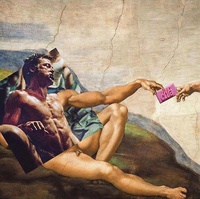 Drive 2 nails into a board at a distance of 56" from each other. Tie to one of the nails one end of the thread and pull it taut, by passing it 11 times round the nails; in the end, fasten the thread to the last passed nail, by passing it round the nail a couple of times and wax it thoroughly. Cut the ends by means of a well sharp razor blade and roll up the tangle. Repeat the procedure for obtaining another tangle.

Now put together the ends of the two tangles and measure 8.6" from the end; pinch with thumb and forefinger of your right hand the two tangles in this point, while with your left hand begin spinning counter clockwise the two tangles on their axle, starting from the 8.6" point. While spinning the tangles, cross them counter clockwise, thus obtaining a plait. You will notice that if you spin the tangles in a sense on their axle, they will well cross just in one sense, i.e. the opposite one to the sense of rotation we are giving them. In this way, by spinning the tangles on their axle and crossing them, go on for 22 crossings; now fold the plait in half and stick together the two ends, thus obtaining the first loop made of the small plait, the two long tangles and the two short ones. Mix by twos the threads of the tangles going in and out of the plait, in order to obtain just a small ring with two long tangles going out of it. Starting from the loop, spin the last 4.7"-6" of the tangles counter clockwise, on their axle, so that the mixed threads get blocked. Then begin crossing the tangles clockwise, thus obtaining a big plait starting from the loop. Go on up to 0.4" from the point where the mixed threads end. Pull out from the plait the last centimetre of mixed threads (even if it would tend to come out by itself) and keep on spinning the long tangles conuterclockwise on their axle and on crossing them clockwise 10 more times. In this way the first loop is ready. Secure the end of the plait with a clasp, in order not to allow it to unroll and think about the other loop.

The problem now is that if you do the same with the other loop, once the string will be ready you would notice that the two main tangles that constitute it would be all twisted, they would look like two separate ropes and this is not good. How to proceed, then? Very easy. First, put the loop just finished in one of the nails and pull it taut towards yourself: this is the easy and correct position for working. Hold a tangle in each hand and spin them 25 times, counterclockwise, with your fingers. Be sure that the two tangles have the same length, otherwise spin the longest a couple of times more, until it is long as the other one. At this point you can do the same as at the first loop; start again from 8.6" from the end, spin conuterclockwise each tangle on its axle (the 25 turns will have already given a bit of torsion to the tangles) and begin crossing clockwise, from 8.6" from the end, for 22 times, thus creating a plait. Fold the plait and put again the two remaining stumps of tangles in the long tangles (this time it will be more difficult to mix the threads, due to the previous 25 turns). Begin creating the big plait starting from the second loop, by spinning counter-clockwise the two tangles on their axle and crossing them with each other clockwise; once arrived at 0.4" from the stump of mixed threads, pull it out and go on for other 10 crossings.

Your string is fast ready. Separate thoroughly the tangles and be sure that none of them is more twisted on one side than on the other one of the string. Now spin the whole string a couple of times counter clockwise and you’re done!.

Set the string to the crossbow: a few turns should be enough to reach the notch of the high “brace-heigh”. After the initial adjustment, it should settle half way between the two notches of brace. Since it is a very manual work, it is unlikely to obtain two strings perfectly alike. Therefore, should the string be too long or too short, open the second loop and do it again, in order to have in the end a string of the correct length.